Posted at 13:40h in News by Pedro Martos
Share

LDA NEO system renovates itself from within with the long-awaited firmware update loaded with many exciting new features and upgrades.

Older firmware versions can be updated to the latest version also with NEO Configurator v0.2.5.4.

2. NEW PROTECTION SYSTEM FOR SPEAKER LINES
NEO already had 2 integrated protection systems: one within the amplifier hardware and another that was constantly checking the voltage and current levels before and after the amplifier. Now we have added a third new protection system based on the impedance supervision.
The new protection system is enabled when you are supervising the speaker lines with a TFL2 (impedance method), either as single line, A+B wiring or Class-A. If the system detects a short-circuit or an earth leakage, only the faulty branch will be completely disconnected from the amplifier. This will protect the hardware of NEO even more.

3. UNIFIED PA/VA VIEW IN NEO CONFIGURATOR
We have unified the traditional PA view and VA view of NEO Configurator in a single PA/VA view for simplicity and ease of use. This will improve greatly the experience of configuring a NEO system. 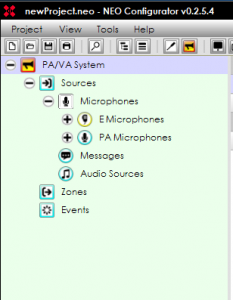 4. NEW EVENTS EDIT MODE IN NEO CONFIGURATOR
In order to improve the configuration of events and the communication protocol with NEO, we have changed the operation of the event manager. Now events can only be edited when turning on the EVENTS EDIT mode.You will be able to create and edit all the events you need from your computer and when you are finished, all the changes you made will be uploaded to NEO directly at once. If you made any mistake, you can always cancel any changes and recover the actual configuration from your NEO system.

5. IMPROVED LOGS VISUALIZATION FROM NEO CONFIGURATOR
Now you can see all the logs of a NEO system directly from NEO Configurator and save them easily as a TXT file in your computer.

6. AND MANY ADDITIONAL TWEAKS