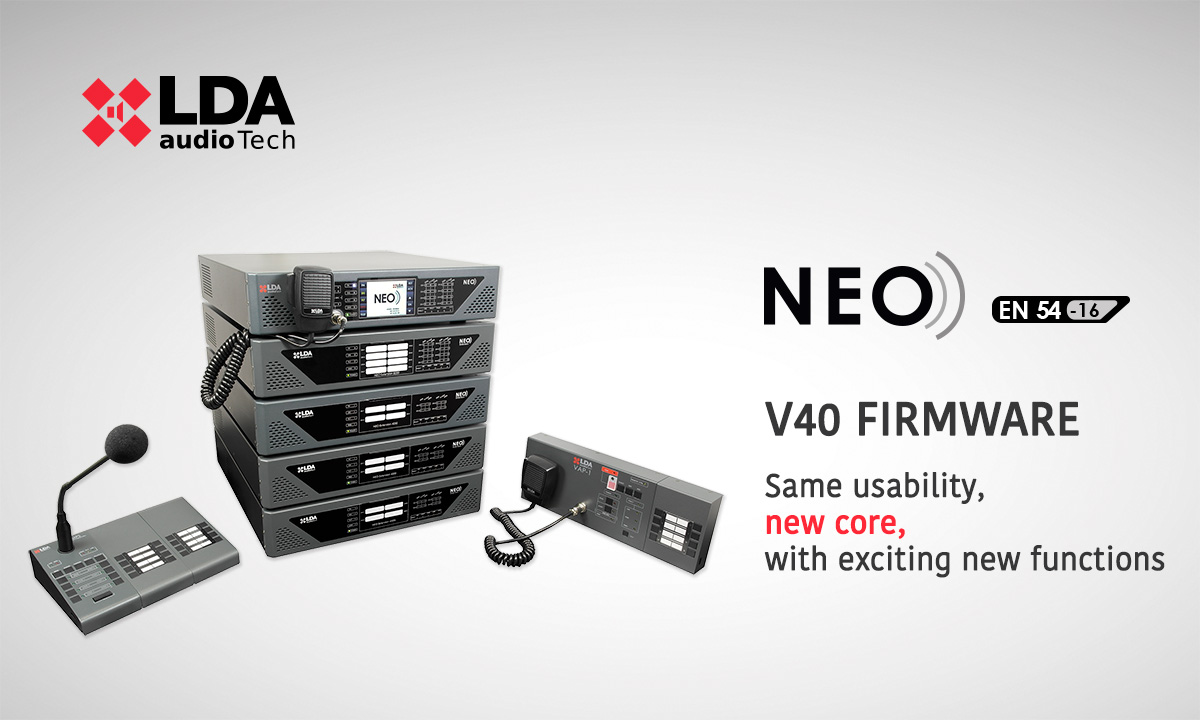 Posted at 08:15h in News by LDA Marketing

NEO, our high-performance EN54 public address, background music and voice evacuation system, takes a step into the future with the development of its new firmware v40. This major upgrade involves the complete renewal of its internal core, keeping the same usability and adding new features that improve its versatility.

Thanks to the firmware v40, NEO will support new functionalities coming to NEO now and in the future, including our upcoming new range of PA microphones and voice alarm panels.

This firmware update is released together with a new version of NEO Configurator:

These are the main new features included in the new firmware v40 for NEO:

Sometimes the biggest changes are invisible to the eye. In NEO v40 we reprogrammed from scratch the internal core of NEO, applying all our accumulated experience to improve even more the security, reliability, and fluidity of the system.

In this process, we have been able to optimize the internal code, so we could introduce even more features to the system. Many of them are available now with this release, but some others will be coming in future firmware updates.

We have been working hard to prepare NEO for the future and one important step has been renovating and upgrading completely our proprietary communication protocol: welcome to ACSI v2.

ACSI v2 is bringing to NEO connectivity with all our future range of PA microphones, voice alarm panels and NEXO, coming soon in 2022 and early 2023.

Below are some of the exciting new features arriving in this new range of products:

It’s important to keep in mind that all ACSI devices connected to NEO must have the same firmware version. It is not possible to combine ACSI v1 devices with ACSI v2 devices in the same bus.

Introducing new DSP equalization filters for our audio inputs and outputs, including:

With the new NEO firmware v40 we can create groups of zones that can be assigned to the buttons of PA microphones and voice alarm panels.

With this new feature, the limitation of 8 zones per microphone button is removed and now you can assign unlimited zones to one button.

If you have any questions about our NEO systems, NEO Configurator or this new release, contact our Support Team, we are happy to help you.

We highly recommend updating all existing NEO systems to firmware v30 (v2.30.XX.31). This update greatly increases the durability and security of the system.

We will continue providing support for both firmware v30 and v40 simultaneously in the coming years.

ABOUT THE NEW NEO CONFIGURATOR:

NEO Configurator is the software that we use to configure and commission all our NEO systems (available to download for free on our Support Website).

Just like with NEO firmware, from now on 2 different versions of NEO Configurator will coexist:

See details in the box below.

Both NEO Configurator v40 and v30 can be installed on the same computer.